In 1990, a manager killed everyone in the training center. Do-jin, the director of the Psychic Research Institute, enters the center after 30 years to solve the mystery of his mother’s death. There he finds three students who have gone there to shoot a video. Things get complicated when the doors close and disappear.

Yes, what to fear. Or is it more of a dizzy feeling? The symbolism of the door is confirmed: one passes from the known to the unknown. This element, in the context of a real abandoned building, immediately throws the actors, characters and audience into a state of intrigue and instability. If James Cameron soaked Leonardo DiCaprio and Kate Winslet in water at the same temperature as the sea that sank the Titanic, it was with the intention of realism, according to him. These icy waters petrify both the actors and the audience. We are cold. So, it is certainly obvious that comparing actors to the real environment causes us to unknowingly take our own values. The feeling that the characters feel, the feeling resonates with us and places it inside the film. Veristic interaction only strengthens.

This notion of uncertainty undoubtedly affects the consistency of the plot. It gives him a comfort that wants to be scary but struggles not to be boring. Cycles merge. More than the ghosts in question, the characters manage to convey to you an uneasiness that slowly builds to a crescendo. Kim Kang-woo and his charisma roam around like an improvised Mario, looking for a door that will allow him to level up. This giddiness we talked about at the beginning of the article is not only due to this game of dancing doors, but also this kind of flashback in the form of deliberately distorted recordings using “found footage”. A far cry from The Blair Witch Project, these spoof videos seem a bit lighthearted and always seem to have an unintended intent: to scare us or make us want to puke. .

However, the script is valid. The story is interesting, although we are in the typical category of horror films, such as the quoted “The Blair Witch Project”.or even “Gonjiam: The Haunted Asylum” (the latter failed to show us what South Korean horror cinema really is). The addition of The Students confirms our fears of déjà vu, but the concept of timelessness balances “it’s a good movie.” This confirms to us the vital desire of South Korean cinema to find this thing, this detail that will make a film unique, even innovative. Unfortunately, once all these details are removed, once we are aware of the plot, the characters, the tricks this premise can play on us, and we’re left with twists and turns, the script, the film falls apart and we’re ready for a reminiscent sequel. from that forgotten coffee in the kitchen. We would like to finish it, but we are reluctant to swallow it because it has lost its heat and aroma.

But… but… but… Kim Kang-woo carries the film on his shoulders, we want to accompany him and discover the sequel with him. It’s a real shame to classify Guimoon: The Lightless Gate as a horror movie. It is true that some films have difficulty placing themselves in a specific genre. By showing us the label “horror”, we expect to be inevitably scared (when a movie is called “Elvis”, we expect the movie to be about Elvis, not about Elvis’ manager… ). A film’s title or announced genre will create disappointment when the script doesn’t fit within what we’re told. 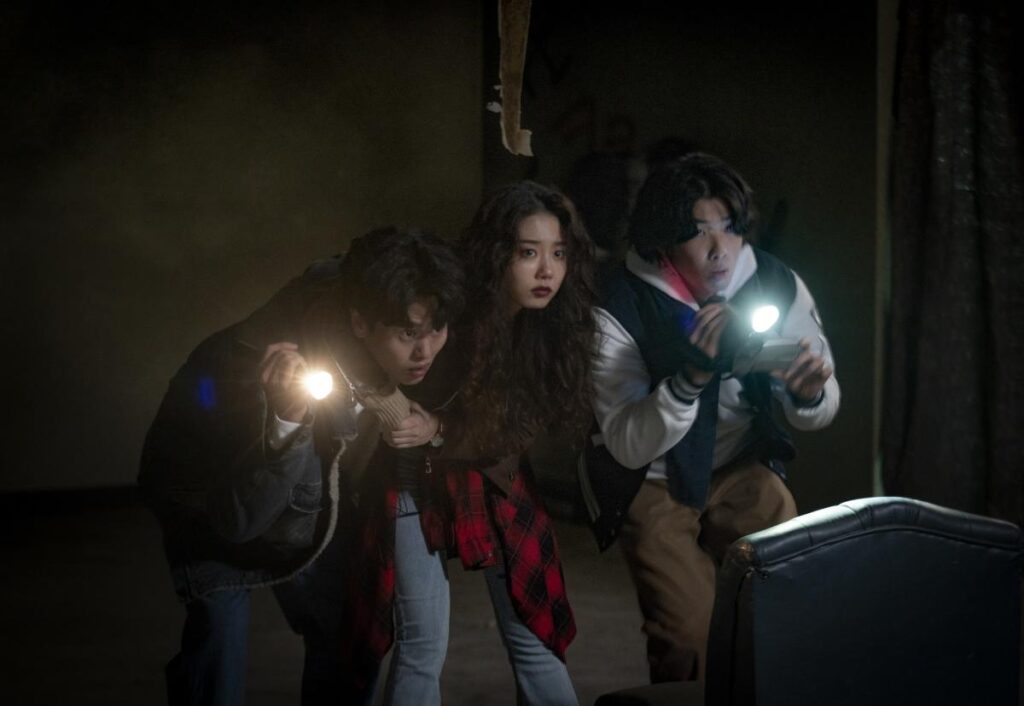 It is a pity that suddenly the film loses its quality in our eyes. The plot, the suspense, the location, the doors, the timelessness, the editing, the perfectly suited soundtrack, all with a few jump scares, all these elements could have placed it at the top. If director M. Night Shyamalan’s film The Sixth Sense was originally characterized as a fantasy thriller rather than a horror film. Despite all the déjà vu, this is a film that leaves more than meets the eye, and one that fans of the genre (and Kim Kang-woo, it must be said) will appreciate. Good evening in perspective.